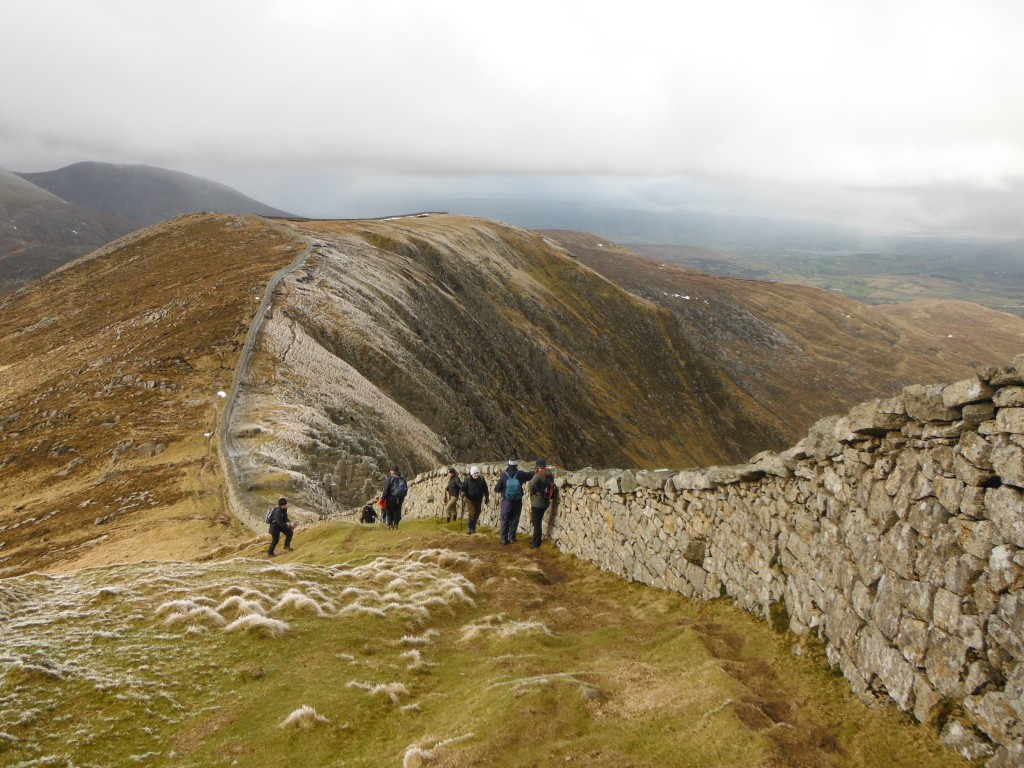 Forty five members and friends joined us on the weekend of 21/22 February for this year’s annual hill walking expedition to the Mourne Mountains. This was our fourth visit and again was organised by Robert Murphy & Donal Brennan.  Our base for the weekend was Tollymore National Outdoor Centre, Bryansnsford near Newcastle in Co Down.

Everyone assembled on Saturday at 9.45 in the main hall. Three grades of walk were set out, Hard, Medium and Easy. Group leaders were introduced; maps distributed and radios allocated. Departure was scheduled for 10.00.  Weather conditions were perfect with sunshine, clear skies and a crisp light wind; it remained like that for the rest of the day.

The more advanced hikers, eleven in all, left the western end of the park and headed up to “Hare Gap.” They followed the” Brandy Pad” to Slieve Commedagh which they climbed. Coming off that mountain they then climbed up Slieve Donard (Ulster highest mountain 853mt.). At the top the view was specular but shortly afterwards the weather closed in. Coming down off the mountain they made their way to Heirs Pub in Newcastle. They were later collected and brought back to base.

The “Medium” group of twenty eight followed the same route as far as the “ Castles” they then turned  north between Slieve Commedagh and Eagles Rock then down along the Glen River into Donard Forest, turning west to link up with the perimeter wall of Tollymore Park. They followed the wall until the entrance gate at the “Drinns” and from there back to base. In all it was about 20km and took seven hours

The Easy walk group six in all, stayed mainly within the forest park covering 10km and were back at base at 15.30

Dinner was served at 19.00 with a choice of three main courses; everyone brought their own liquid refreshments which helped to keep the party going for the night. Unfortunately there was no sing a long this year despite the guitars being available.

On Sunday it was planned to have a walk within the park but the weather was very poor with heavy rain and strong wind so everyone took their leave and headed for home.