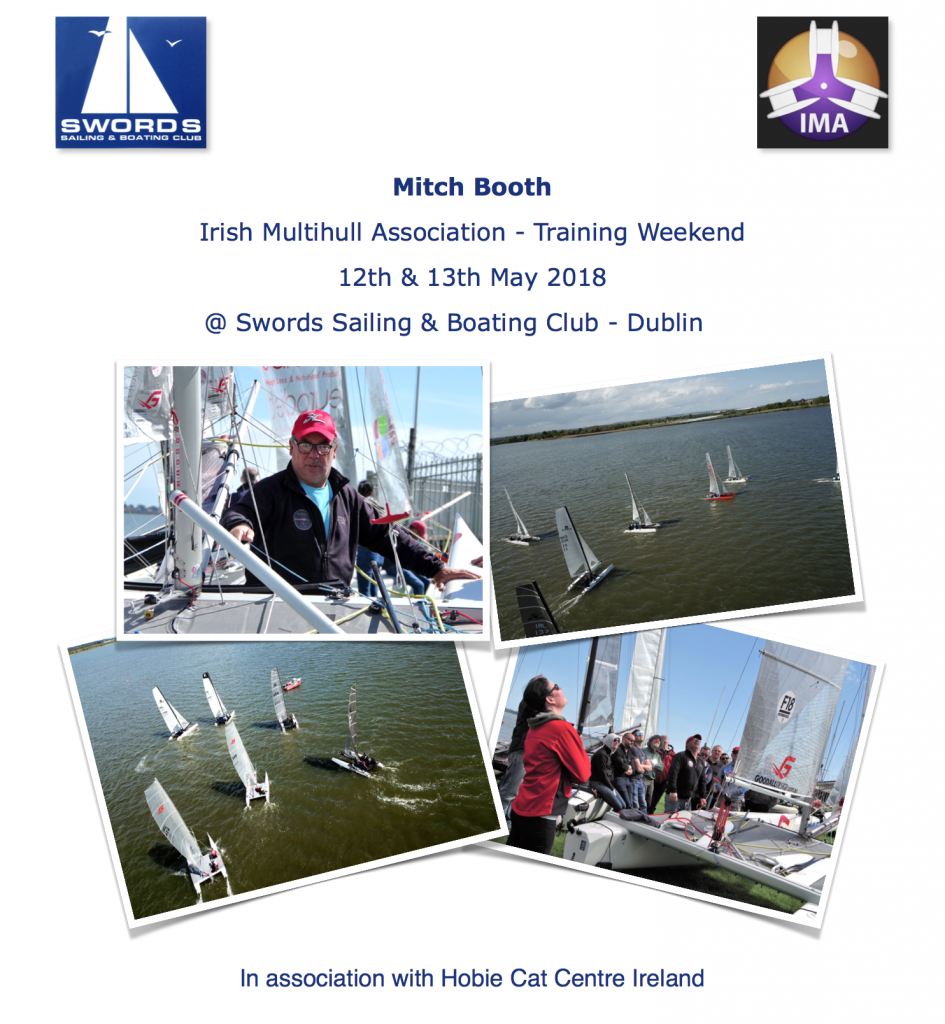 Australian – Mitch Booth is known worldwide for his association with multihulls, having competed at no less then 4 Olympics in the Tornado class; medaling twice. He has also competed in 64 World championships and won 10 of them. He now resides in sunny Spain and is in demand around the globe advising and training with Olympic teams and class associations like ours. Some of us were lucky enough to meet and race against him at the 2017 F18 World’s in Denmark.

With eight F18’s, two Hurricane 5.9’s and one F16 in attendance, Mitch brought the sun with him from Spain, day one looked like we would have no wind as a result; the forecast was quite light. However, first up was a briefing in the club house; going over all that secret racing stuff we all want to know. Tuning, boat handling, tactics/strategy, starts, acceleration, mark rounding’s, tacking/gybing and of course going fast……

Armed with some of that secret knowledge, like gladiators ready to tend their chariots we rigged our boats, 1 extra notch here, an extra pound on the Loos gauge there; with brief boat on boat one on ones with Mitch. By the time we had finished and got kitted up, we were greeted by the start of a fantastic sea breeze building as we launched our boats for our first on the water session.

If you have been lucky enough to compete at a World’s or any big fleet racing, you will know that starts are crucial. Boat handling is key to parking the boat and making sure you don’t collide with anyone; most importantly that you get away fast into clean breeze from the front row and don’t get rolled or spat out the back. Assistant coach Dermot McHugh and his brother Kevin ferried Mitch around and laid the marks for our quick turn around practise starts, each with varying degrees of success and one or two boats OCS or so we thought.

After lunch the fairly constant sea breeze created almost perfect champagne sailing conditions. We progressed to a one lap race after every third start finishing downwind with crews trapezing and kites flying.

After a fantastic first day, we headed back into a debrief session utilising excellent drone footage courtesy of Kinga Trojanowska. There was no hiding and the guilty OCS culprits were well and truly outed, all in good jest. A delicious barbecue and refreshments followed with some great stories to be heard form Mitch and all.

Day two started exactly the same as day one with the sun shining and not much breeze. Following a quick briefing in the clubhouse, we congregated around one boat in the boat park as Mitch went through rigging and tuning for all the varying conditions. Sail shape and airflow over it, are all influenced by the many controls at the helm and crews disposal, getting them all in the optimum position at the right time is somewhat of a black art; times that by three to include the mainsail, jib and gennaker  and you can see why this crucial knowledge separates the master from the pupil. Following Q’s & A’s everybody agreed and enlightened by a true master.

As we consumed a quick lunch the magnificent sea breeze had kicked in, we launched and sailed a square course to cover all points of sail as Mitch and Dermot followed us round with varying tips on what we could do to improve. By 2pm we joined the Swords scheduled racing for the afternoon and put into practise all that we had learnt. We were

joined on the water by quite a few lasers, and other boats that made up the remainder of the Swords fleet. Great fun as we weaved in an out on a fantastic sailing weekend finally.

Many thanks to Mitch Booth…See you soon mate…

Thanks to our event sponsors:-

Many thanks to all that helped out over the weekend with special mentions to Dermot, Kevin and Jackie at Swords Sailing and Boating Club & the IMA.

Both Mitch and Swords Commodore Stephen Broaders were interviewed by Fergal Keane for his RTE radio 1 show ‘Seascapes’ (https://www.rte.ie/radio1/seascapes/)  Broadcast on 18th May and available on podcast.